Sardar Usman Ahmed Khan Buzdar is the chief Minister of Punjab. He is elected chief minister of Punjab on 19th August 2018 . He assumed office from 20th August 2018. Usman Khan Buzdar also served served as Tehsil Nazim Tribal Area Dera Ghazi Khan from 2001 to 2005 and 2005 to 2009 . Politically he is affiliated with Pakistan Tehrik e Insaf PTI . He was elected member of Punjab Assembly from PP-286 Tehsil Tounsa District Dera Ghazi Khan.
He was born in May 1969 in Dera Ghazi Khan to Sardar Fateh Muhammad Buzdar chief of Buzdar Baloch Tribe . He received his early education from his native town . He completed his graduation from a Government Emerson College Bosan Road Multan and received a masters degree in political science from Bahauddin Zakariya University and received a degree of bachelor of laws from the Law College Multan. 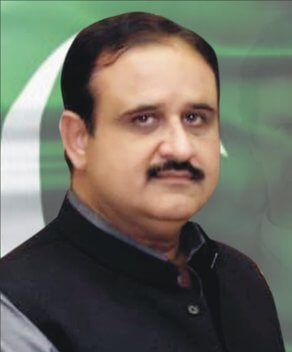 On 19 August 2018, he was elected as the Chief Minister of Punjab. He received 186 votes against his opponent Hamza Shahbaz Sharif who secured 159 votes. He was sworn in as Chief Minister of Punjab on 20 August 2018 . Sardar Usman Ahmad Khan Bozdar was made the chief of Buzdar tribe in a traditional event at Barthi Tumman Buzdar after death of Sardar Fateh Muhammad Buzdar